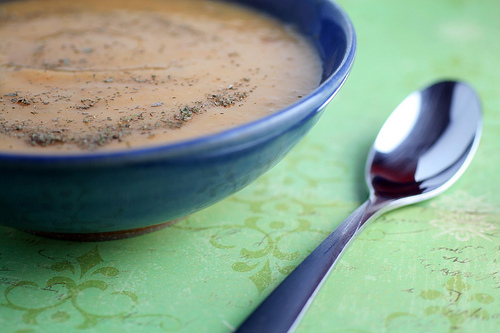 Hey, would you look at this! There’s a food post on SFTF again! And here you’d thought it had become a gardening blog. Truth of the matter is that the local food pickin’s are slim here in March when we’re just shy of getting the season’s first lettuce and baby greens. I’ve had to look to my shrinking stash of root vegetables to carry us through the last few weeks of “winter”. Even if it is 70 degrees outside my front door today here in Philadelphia, it’ll be awhile yet until there’s much fresh eating to be had from the garden and at the farmers markets.

See that ugly duckling up there? The one in the upper left? I swear it’s quite tasty, even if it’s not pretty! Celeriac root became a favorite over the course of this winter. I’ve recently been converted to mild anise flavors in my food and tea even though I hated, to the point of gagging, the taste of black licorice when I was a kid. Since I was so repulsed by anise in the past, I really hadn’t give celeriac much of a shot since I’d heard it tasted a bit like licorice.

Once I gave it a try, celeriac (also called celery root because it’s celery family member grown for its root, not stalks) turned out to have very little anise flavor (at least the ones grown at the farm). Instead I find it rather nutty and a little biting like celery sometimes is. I’m muddling up describing it for you, I know, but I hope you’ll be intrigued enough to grab one of these scruffy roots next time you see it to give celeriac a chance to prove it’s what’s on the inside that counts.

Celeriac is almost synonymous with soup. It’s good for adding that little “something” to the flavor and for thickening it up. This Celeriac and Ginger Soup has a lovely silken texture and a complex taste thanks to the celeriac and ginger flavors playing so nicely together. It’s very warming and has some unexplainable hint of spring in its fresh aroma.

What are you subsisting off of in these last few weeks of winter?

Combine the celeriac, carrot, potato, garlic and ginger in a large heavy saucepan. Cover with the vegetable stock and add a sprinkle of salt. Bring to a boil and then reduce the heat to low. Simmer for about 30 minutes or until all the vegetables are soft when pierced with a fork. Remove from heat and let cool for a few minutes.

Puree the soup in a blender or food processor until it is smooth and creamy. An immersion blender works great for this. Return soup to the saucepan over low heat. Stir in the milk (if it is thicker than you’d like, you may add more milk or a little water to thin the soup as desired) and season with dried herb, cumin and pepper. Taste and adjust seasonings as needed. Serve hot.