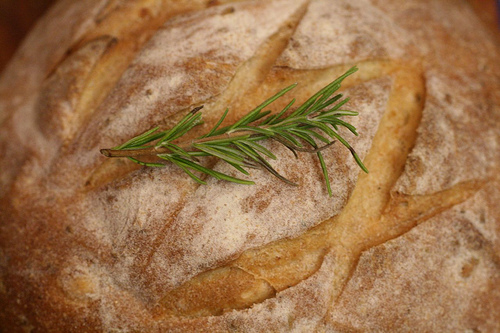 Two weeks of non-stop bread recipes. Aren’t you people satisfied yet?! I actually now have five more bread recipes waiting in the wings for a third week. Won’t somebody please save me from myself?! We will be taking a brief intermission from bread next week though as I have an original recipe for a Valentine’s Day treat that’s not bread-based. Since I like to keep my bread weeks pure, a change in theme is necessary.

Enough with the administrative mumbo-jumbo. Let’s talk about this sumptuous loaf of Rosemary Olive Oil Potato Bread. All the bread I’ve been baking lately has been superb, but there have been two clear front-runners. Last week it was the pita. This week it’s this rosemary loaf.

Let’s rewind a bit to a few weekends past when I was having a much-needed girls’ day out with my friend, Christine, during which we talked about men, work, aspirations, and, of course, food. She was currently in love with a loaf of rosemary olive oil bread she bought from Willow Creek Orchards that was actually made by Metropolitan Bakery here in Philadelphia. Knowing I own a copy of their recipe book, she asked me to look to see if it was listed so she, being the industrious homemaker she is, could make this bread herself. When I got home, I obliged and did indeed find a recipe for a rosemary bread.

However, it seemed unnecessarily complicated, so much so that I, bread baking addict that I am, was put off by the idea of making it according to their specifications. What did I do? Naturally, I went hunting for a more straightforward recipe that might yield the same crusty aromatic results. All the recipes I found kept coming up short though. There were plenty with rosemary, but they didn’t include olive oil. And then there were plenty with olive oil, but those didn’t include rosemary nor did they seem to have the heft of an artisan bread. Finally, a little stumped, I thought I’d look through my baking books for a picture of a loaf that at least looked like the one I’d seen in the Metropolitan Bakery’s book. I found two potato breads that seemed to be a rough match.

I like potato breads – they’ve got heft and they’d be a nice palette for the rosemary. The olive oil was still the sticking point though. I didn’t want to end up with an overly wet dough that would require too much flour and end up heavy as a brick. After all, there’s “heft” and then there’s “don’t drop that or you’ll crack the floor”. I spent a good two days mulling it over before I hit the ticket: roast (vs. boiling) the potatoes so they’re dry and then use the olive oil as the moisture needed to mash them up.

It worked like a charm! Besides producing a tasty artisan loaf, the smell…oh the smell…of this bread baking is like no other. The olive oil in the slices makes them the perfect choice for grilled sandwiches since it turns golden brown and crisp. The rosemary asserts its fragrance no matter how you serve it. It’s just a wonderful loaf of bread in every way.

There’s one test to be passed yet though. I anxiously await Christine’s verdict so I know if it rivals that made by the Metropolitan Bakery. Fingers crossed!

A practical side note about this bread: It’s very moist and so does not keep terribly well at room temperature. If you are not going to be able to use it up within three or four days of baking, I would suggest keeping it in the fridge. Let it come back to room temperature before you serve it, unless you’re making a grilled cheese, in which case it’ll get heated up anyway.

Adapted from a combination of recipes from various sources

Combine the yeast, flours, rosemary and salt in a bowl. In another bowl, combine the potatoes and olive oil; mash them together and add a little water if needed to get them smooth. Turn mashed potatoes into the flour mixture and begin mixing. Add about a half cup of warm water and continue mixing. Add more water as needed until it forms a soft dough.

Turn out dough onto a floured countertop and knead for 8-10 minutes until smooth and elastic. Clean out the mixing bowl and spray lightly with cooking spray. Place dough in bowl and cover with a dishtowel. Place in a warm place and let rise for an hour or until doubled in size.

Turn out risen dough on to a floured countertop and punch down and knead for a minute or two. (If you want two smaller loaves, divide the dough now.) Flatten out with your hands and then fold dough up like a business letter. Turn it seam side down and rotate while cupped in your hands to shape into a plump oval loaf. Place on a baking sheet lined with parchment paper or a slipat. Sprinkle the top with a little whole wheat flour. Cover the loaf(s) with the dishtowel and let rise in a warm place for half an hour or until doubled in size.

Preheat the oven to 400 F. Using a sharp knife, scour the top of the bread with three or four diagonal cuts to make a crisscross pattern. Bake for 30-35 minutes or until golden brown and hollow-sounding when tapped. If you have a spray bottle handy, use it to mist the sides of the hot oven with water just before putting the loaf in and then every 3 minutes for the first 9 minutes. This moisture will create an extra crispy crust.

Transfer to a wire rack to cool. 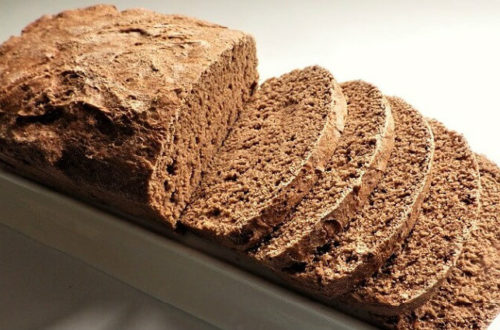